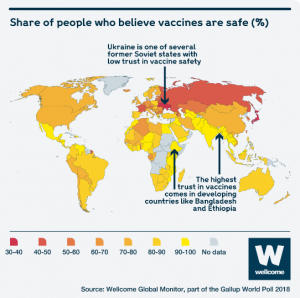 Vaccine hesitancy (the reluctance or refusal to vaccinate despite the availability of vaccines) has been listed as one of the top ten threats to global health in 2019 by the World Health Organisation (WHO). Dr Ann Lindstrand, an expert in immunisation at the WHO stated that “vaccine hesitancy has the potential, at least in some places, to really hinder the very real progress the world has made in controlling vaccine-preventable diseases”.[1]

What are the causes of vaccine hesitancy:

The reasons why people are no longer choosing to vaccinate themselves and their children are complex and varied.  A vaccines advisory group that were working for WHO identified complacency, inconvenience in accessing vaccines, and lack of confidence as key reasons behind the underlying hesitancy. [3]

A common reason given for vaccine hesitancy is lack of trust in the government and the vaccine industry. The lack of trust leads to fear about the safety of vaccines causing parents to delay or refuse vaccinations for their children.[4]

Another of the reasons behind the decline in vaccinations is due to the fact some countries now so rarely see the deadly diseases (such as polio or diphtheria) which are prevented by vaccines, people no longer fear the disease itself but instead fear the perceived harm from the vaccine.[5]

Measles is an extremely contagious that has the potential to cause fatalities but unfortunately since 2016, its presence is on the rise in the EU. Measles has returned to four European nations (Albania, the Czech Republic, Greece and the UK) previously seen as free of the illness, according to the WHO.[6] According to Kate O’Brien of the WHO’s Immunization Department “We are backsliding, we are on the wrong track.” Dr O’Brien blamed misinformation about vaccines and called on social media companies and community leaders to provide “accurate, valid, scientifically credible information”.

Based on the European Centre for Disease Prevention and Control’s (ECDC) epidemiological assessment, there is a high risk of continued widespread circulation of measles in EU/EEA in the near future, as long as significant immunity gaps and suboptimal vaccination coverage remain. [7]

Nevertheless, China once a measles free country, has reported that measles has returned this year.[9] Public health experts in China blamed misinformation about vaccine safety as the main reason for the resurgence of measles outbreaks. Gauden Galea, the World Health Organization representative in China also blamed the resurgence of measles on widespread misconceptions about vaccine safety and effectiveness.[10]

[7] European Centre for Disease Prevention and Control, https://ecdc.europa.eu/en/news-events/ecdc-insufficient-vaccination-coverage-eueea-fuels-continued-measles-circulation (Consulted on 18/09/2019)